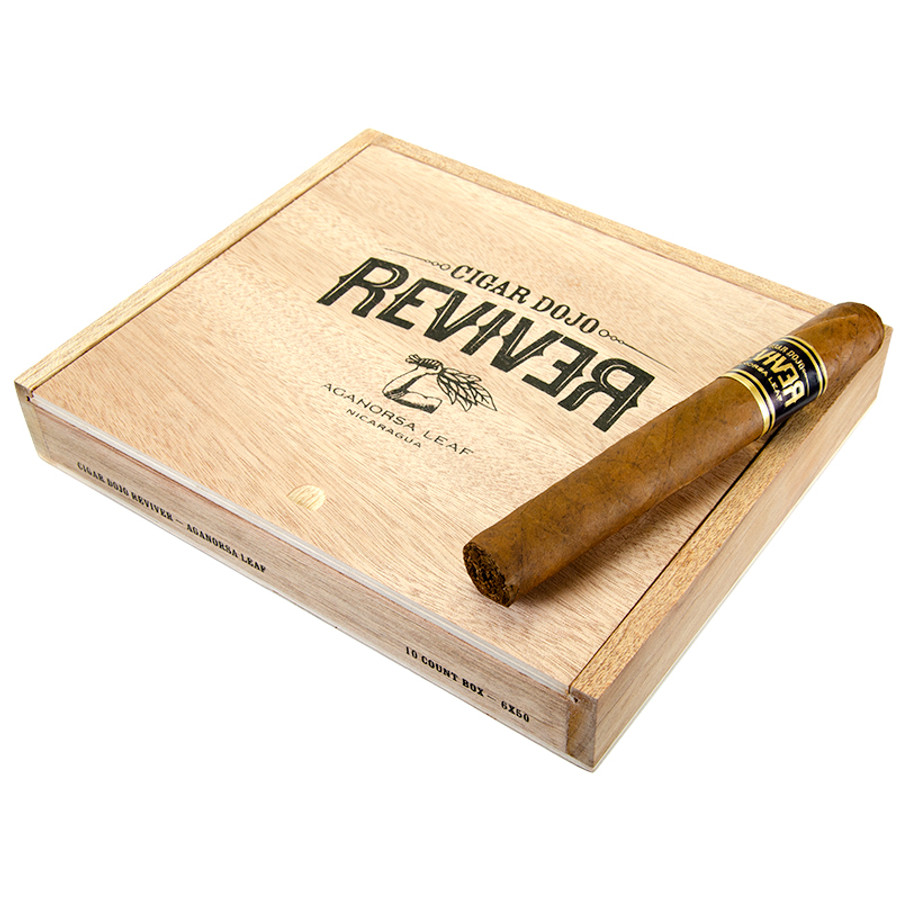 Limited Edition Release - Purchase your box before they are sold out!

One of Cigar Dojo's most popular and critically acclaimed collaborations is returning for 2021, with the Aganorsa Leaf ReviveR coming back in its original size and blend. ReviveR first launched in the summer of 2018 with a limited run of 3,000 cigars. The blend was developed by Max Fernández, tailored to Cigar Dojo's tastes through the selection of Corojo and Criollo leaves primarily from Aganorsa's farms of Jalapa, Nicaragua. This region is known for producing a sweeter smoking character, in comparison to the more fiery tendencies when heading south to Estelí. With ReviveR, the two combine to offer a zesty profile through the retrohale, followed by a clean, sugarcane-like finish.
For 2021, the cigar returns in its original 6" x 50 toro format and blend, with slightly refreshed packaging to distinguish this release from the original run. This includes the use of a raw Aganorsa tobacco leaf within each slide-lid box, allowing cigar hobbyists the chance to experience its aromas before the rolling process, as is done on tours to the Aganorsa Leaf factory in Estelí, Nicaragua. Additionally, the ReviveR's bands have been updated to emphasize the cigar's palindrome-inspired logo and profile, which is intended to "revive" even the most hardened of palates.
Eric Guttormson, owner of Cigar Dojo, commented, "If ever there was a Dojo collaboration that needed to come back, it's this one. I have made no secret about the ReviveR being one of my favorite Dojo releases, and I couldn't be more excited about its return. We wanted to refine the branding a bit this time around, but the cigar itself is identical to the 2018 version, because if it ain't broke, don't fix it."

These are an awesome smoke the clean smoke that you get and that sugar cane taste is so spot on! Aganorsa farm Jalapa Valley Esteli....everything coming out of here is always great! I bought 1 box to try and since I&#039;ve gotten 3more love em!

I have now bought 3 boxes. This is a beautifully complex cigar with a huge parameter of flavor points....some bold and some bubbling in the background. You don&#039;t need to have a sophisticated palate because what&#039;s good is good and your palate will recognize this instantly. The price is insanely reasonable for this kind of quality. You will be sorry if you do not grab a box. You will have non-buyer&#039;s remorse.

This is a great smoke. I wish they were available all the time and I wish I had room to buy more.

Just received my box and smoked one right away. It was excellent and I like forward to aging it a bit and trying again. Delicious. Pick up a box.