Throughout American history, heroic military personnel have put their lives on the line to protect the nation they love and the liberties they feel everyone should enjoy. By the end of the 1860s, people in American towns and cities were putting flowers on the graves of the many Civil War soldiers who had died and saying prayers for them.

Memorial Day is also observed in the United States by honoring the memory of fallen members of the service. Several individuals wear red poppies in honor of those who died in battle, a practice that dates back to a poem written during World War I.

Even though it is a solemn holiday, many people enjoy weekend trips, parties, and barbecues. This may be because Memorial Day weekend, which includes the Saturday and Sunday before Memorial Day as well as Memorial Day itself, is often seen as the unofficial start of summer.

Lighting a Cigar for Memorial Day
At Atlantic Cigar Co., we're all about celebrating life's triumphs, no matter what they are. On the other hand, on Memorial Day 2022, we ask all cigar enthusiasts and even those who would just want to remember this day with us to light a cigar full of richness and character—the Fuente Fuente Opus X.

The Fuente Fuente Opus X is a one-of-a-kind and well-aged blend of Dominican tobaccos grown on the Fuente family's Chateau de la Fuente estate. The dark Dominican wrappers and filler and binder tobacco in these cigars make for a well-balanced smoke that is both aromatic and full-bodied. This cigar is for Fuente fans who want a special cigar for a special occasion. It has more complexity and a fascinating depth.

With its 27th anniversary this year, it is clear that OpusX is a highly prized, complex, and utterly unique cigar that continues to be sought after. The mystery surrounding OpusX cigars continues, but here are a few facts that will shed some light on the tobacco brand that became a sensation. 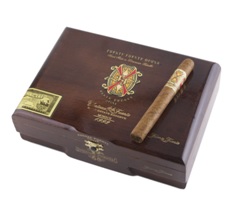 Many consider Fuente Fuente Opus X to be one of the best cigars on the market today. As a tribute to our soldiers who have died, other high-end cigars have to live up to the standard set by this one. When it first came out in the mid-1990s, it set the bar high for non-Cuban cigars, and it's continued to do so ever since.

At the Arturo Fuente cigar factory in Santiago, 32 rollers work together in a dedicated chamber to ensure that each Opus cigar is made precisely. It's a premium cigar factory inside a factory, and each one is manufactured with affection and attention to every little detail. Workers even use an old Cuban method called "en tubado" to make the filler. In this method, the roller makes little tubes out of each leaf before pulling them together into a cluster. It takes more time, but the result is a cigar that's really enjoyable to smoke.

For a new Memorial Day tradition at Atlantic Cigar Co., check out Fuente Fuente Opus X as well as the following premium cigars that would make an excellent, relaxing addition to your Memorial Day celebrations.

Other Premium Cigars
The Arturo Fuente Fuente Opus X may be one of the most lauded cigars in the industry, but that doesn’t make it the only Memorial Day appropriate stogie. Consider some of these top-sellers from our catalog as well!

Davidoff Escurio Gran Toro
The Davidoff Escurio Gran Toro is a full-strength cigar that is masterfully blended from a variety of different, carefully selected tobaccos. The heart of the cigar is a unique and powerful mix of Brazilian Cubra binder tobaccos and Dominican San Vicente, Piloto, Olor and Piloto Seco with some Brazilian Cubra and Mata Fina. The accent mark that completes the gustatory symphony is a beautiful, rich, dark Ecuadorian Habano wrapper.

Powerful, complex, and rich, this cigar is perfect for those that love strong, full-bodied blends. Make it the highlight of your Memorial Day!

Medium to full-bodied, producing a tight white ash, and offering an even burn and smoke, these cigars are rich in notes of wood and earth. Highly recommended, and considered by critics to be one of the best cigars in the industry.

These cigars are made with binders and fillers from the Dominican Republic that give this cigar a complex, medium strength - but it is the Connecticut shade wrapper that defines them, a specific type of Connecticut wrapper known as a Connecticut Fermented Wrapper, or CFW.

Diamond Crown’s CFW leaves undergo two fermentation processes; the first is a baled, five-year fermentation. From these, the silkiest and smoothest leaves are selected for a second fermentation, a second curing that develops the rich color of the wrapper and gives this cigar complex, sweet, smooth savors.

Carefully and painstakingly crafted with Nicaraguan long filler tobaccos and capped with an oily Nicaraguan wrapper, the Plasencia Alma Fuerte Robustus I offers a powerful smoke that offers up a rich array of notes.

Cigar enthusiasts enjoy both the strength and complexity of these Plasencia cigars, commenting that the cigar furnishes notes of leather, cocoa, spices, and more throughout the life of the smoke.

It’s no surprise, then, that this cigar was awarded a 93-point rating by Cigar Aficionado in 2017.

The first rule of enjoying tobacco is not to let anyone tell you what to like, though. Try one for yourself and see what you think: did CA hit the nail on the head or what?

Questions About Our Premium Cigars?
Interested in learning more about our premium cigars, or looking for personalized recommendations? Get in touch with us at 800-887-7877 and we’d be more than happy to help.