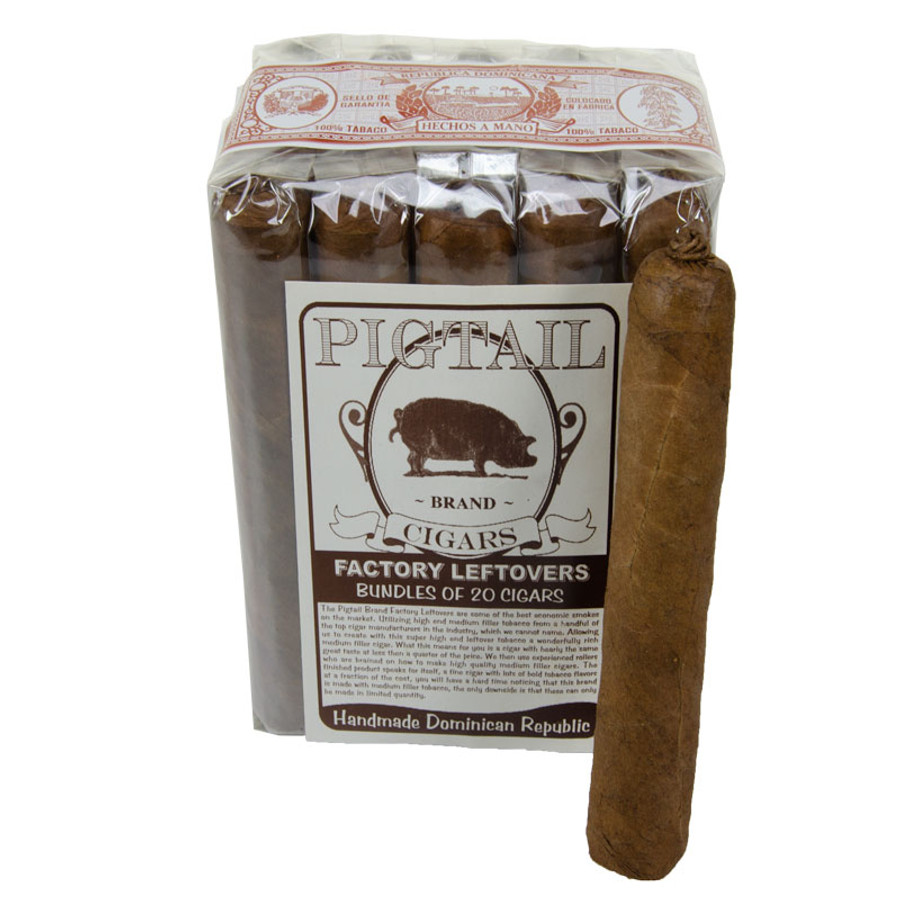 Overview
The Pigtail Brand Factory Leftovers are some of the best economically-minded smokes on the market. The cigars are hand-made with high-end medium filler tobacco from a handful of the top cigar manufacturers, which we cannot name at their behest.

The tobacco for these cigars is gathered from the tobacco scraps that are leftover from their premium lines, which allows this brand to pack great flavor for a super low price point.

The Pigtail Factory Leftover is a medium-bodied cigar with great flavor and construction. The factory only uses experienced rollers who are trained on how to make high-quality medium filler cigars, which means these cigars will always have superior construction. You will have a hard time noticing that this brand is made from medium filler.

The finished product speaks for itself: a fine cigar with lots of bold tobacco flavors at a fraction of the price. The only downside is that these can only be made in limited quantities.

Now available in the original blend made with an Indonesian wrapper, or the new genuine Connecticut-Shade wrapper.

An unlit cigar has a weak aroma - notes of natural tobacco leaf and a bit of cedar wood. I served the cigar with a V-shaped cutter, although a regular guillotine for such a hat would do even better. If you stretch the air through a cut, but not lighted cigar, you can feel some notes of the future bouquet of tastes and these are notes of sweet cedar and a very small nut, like cashews, only without a creamy component. At the moment of lighting, the bouquet of smoke consists of well-distinguishable notes of sweet cedar and walnut. That is, the taste of smoke is the same as air in a cold broach, but more intense. In the first third, this cigar does not spoil any variety of taste, and the smoke itself is somewhat harsh. The smoke is not brutal, but it is also very far from the soft creamy one. However, the cigar calms down even before the end of the first third and the character of the smoke changes to balanced, really soft. At the very end of the first third, some creamy notes are added to the simple but pleasant bouquet, which enhance the nutty component of the bouquet. True, and the notes of cedar do not disappear from the taste, but at the same time they successfully harmonize with the main taste. From the beginning of the second third, a funny metamorphosis took place with the bouquet of taste - the main components were reversed. The notes of sweet cedar now form the base, and the semisweet nut is more noticeable in the aftertaste. Such castling does not happen instantly, of course, but during the whole third and its result is most noticeable at the very end. The beginning of the last third on the prevailing bouquet has almost no effect - it is still notes of sweet cedar in the base and nut in the aftertaste. Only in the middle of a third, a subtle, and then more clearly distinguishable, note of black pepper was added to the bouquet. The smoke grows sharper, and this sharpness increases with each puff. True, the peppery note never reached an uncomfortable level, remaining only at the level of an additional, background taste. What&#039;s the bottom line? A solid cigar with a simple but pleasant taste. The strength of the smoke is confidently average, the duration of smoking is about 40-50 minutes. Thanks to the slightly dominant taste, the cigar can make a decent pair of strong, richer drinks. In general, Pigtail Factory is clearly not a bad cigar, for daily smoking, so to speak, between times, because the bouquet of a cigar is pleasant, but does not require special attention from the smoker.

The pig tails are a great cigar... if you want to break it up a bit. Excellent taste and wrapper. Burn is really good. If you don&#039;t like smokin your premo cigars.... or sharing with your friends these are perfect. Enjoy a pig tail every so often.